Note: This post is excerpted from the September issue of the Global By Design newsletter.

Earlier this year, we published the third edition of The Web Globalization Report Card, our annual benchmarking of many of the world’s leading corporate Web sites.

For 2006, we expanded our focus to include a number of government and non-profit Web sites, including Wikipedia. We suspected that Wikipedia would score well given its global reach, but we were quite surprised to find it scoring a 93 out of 100, second only to Google, which scored 97.

How did Wikipedia, with a budget of less than half a million dollars, develop a global Web site that scored better in our tests than a host of billion-dollar multinational corporations?

A global network of volunteers, for starters.

But the more we studied Wikipedia — and interviewed the interim executive director Brad Patrick — the more we realized that there were some valuable lessons here that any company could benefit from.
Leading with Language

The home page of Wikipedia is dominated by language links; the languages that support the largest number of articles are most prominent. Wikipedia uses Unicode as the default Web page encoding so that all languages may be displayed in their native script — essential to improving usability. Given the large number of scripts that Wikipedia supports, your browser may display some language names as a series of questions marks or empty boxes — a sign that your computer does not have the required font. 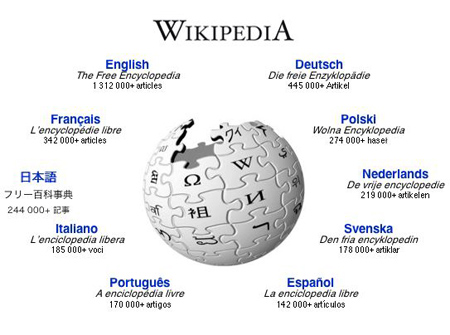 Language –in form of the two-digit language codes — also forms the foundation for the architecture of the Web site. As shown below, the URLs for the “apple” entry from the English and German Wikipedias vary only by language code:

With a design that is utilitarian in nature, the content becomes king. And it is the content that makes Wikipedia so popular

According to Alexa (www.alexa.com), Wikipedia is the sixteenth most popular global Web site. But the site is even more popular in countries such as Germany and Canada. According to Alexa, here is Wikipedia’s popularity ranking within specific countries:

There is a rough correlation between depth of content and popularity within a given market.
Q&A With Brad Patrick

Brad Patrick is the interim executive director and general counsel for Wikipedia. We recently spoke with Brad to better understand how Wikipedia works and where it is headed.

Q: So the amount of content within each language is completely dictated by contributors?
A: Yes. You’re going to see different degrees of content by language. We are not going to orchestrate one size fits all. Even the press releases for the Wikipedia Foundation are handled this way. They are translated into languages according to the willingness of contributors to do so.

Q: What percentage of your traffic is directed toward English-language content?
A: Roughly 60%, and falling.

Q: What has been key to the success of Wikipedia?
A: You have to trust your community. We’re not telling this mass of people what to do. You have to listen to them. This is not a top-down effort but a collaborative effort.

Q: How is Wikipedia supported financially?
A: We have a very strong donor base. Periodically, we conduct fundraising drives; we raised $400,000 in four weeks last year. We are not a membership organization and do not have plans to become one. We are interested in developing institutional support.

What can a global Web services manager learn from Wikipedia? We have identified four attributes of Wikipedia that we believe have relevance even to large multinationals.

1. Keep Content Close to the User
If there is one takeaway from Wikipedia, it is in the power of letting go. Or, in corporate-speak, decentralization.

Because Wikipedia was built from the ground up to rely on its content contributors, it relinquished a high degree of control over content from the start. Content stays close to the user because it is written or translated by the very people who consume the content.

While we do not necessarily advocate turning over the content reins to your customers, we do believe that local employees and partners can and should play an active role in content creation and management. They are generally more in touch with current events in the subtleties of their countries and cultures.

As large companies strive to centralize tools and content, they need to do so gently and tactfully, so as not to dampen the enthusiasm of the local content creators, reviewers, and managers.

The people who create Wikipedia content are a passionate bunch. There are similarly passionate people within large corporations — and it is these types of people who can be ideal for taking a lead role at the local level. The key is in identifying them and giving them the room they need to flourish. It’s all about finding the right balance between chaos and control. Wikipedia seems to have found its balance, and companies can do the same thing.

For the complete article, The World According to Wikipedia, consider becoming a Global By Design subscriber.

3 thoughts on “The World According to Wikipedia”