When I first saw this Web site I couldn’t believe it — a school district Web site that supports 25 languages — that’s right, 25 — including Russian, Somalian, Chinese, Hindi, Urdu, and Punjabi.

Punjabi? There are only a handful of billion-dollar multinationals that offer Web content in Punjabi.

But a school disctrict? A school district in North America? 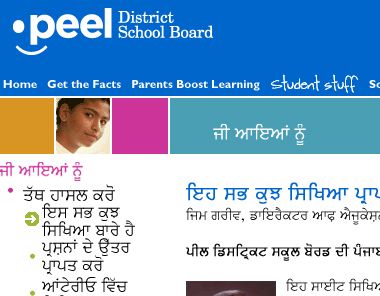 It’s the Web site of the Peel School District, one of Canada’s largest disctricts, with more than 145,000 students.

According to the press release:

Almost 1,000 Web pages reflecting 400,000 words have been translated into the top 25 languages of Peel parents including Punjabi, Hindi, Urdu, Arabic, Chinese, Farsi and Spanish. Languages were selected based on the languages spoken by Peel students. Documents will also be available in hard copy at schools to help parents who cannot easily access the Internet.”

Much of the cost of translation was funded through special parent involvement funding from the Ministry of Education. The funds, intended to help reach out to parents who find school involvement more challenging, also supported the production of significant new resources for school councils, supported regional meetings of parents and councils, and funded parent-outreach work at over half of Peel schools. Notes Jim Grieve, director of education, “As a board, we have an organizational commitment to equity. We want to make sure we reach all of our parents – including those for whom English is not a first language. This new finding was key for us to go to the next level on parent involvement. Without it we would not have been able to launch these language sites.”

This is very impressive. It sends the right message to the parents and, more important, to the students — students who are expected to compete and succeed on a global stage.

Succeeding in a world grown small requires truly understanding this world, the people on it, and the languages that they speak. This Web site is as much about reaching out as it is about reaching in — getting the students accustomed to Web globalization as early as possible, because odds are pretty good that they’ll be seeing a lot of it as they grow up.

-> Thanks to Ryan Coleman at Clay Tablet for letting me know.