As companies add more and more localized Web sites to their portfolio, they are increasingly resorting to using pull-down menus for navigation. Yet as the FedEx gateway (below) illustrates, pull-down menus are no panacea; they may in fact cause more problems than they solve. 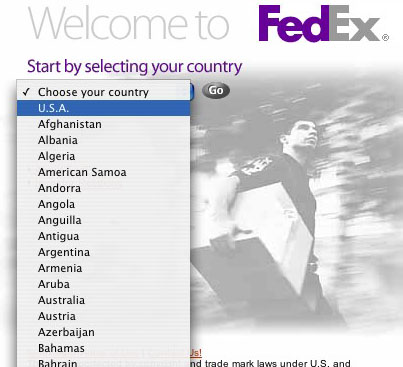 The FedEx gateway includes more than 170 countries from which to choose. For residents of the US, the menu is rather easy to use – as the US has in effect jumped to the front of the line. But what if you are a resident of Sweden, Taiwan, or Venezuela? I’m afraid you have a lengthy bit of scrolling to do.

Finally, FedEx makes a major (but common) mistake by placing the U.S.A. at the top of the menu. This display of favoritism may benefit the bulk of its Web users, but its does not create the appearance of a globally agnostic company. I’ve spoken with more than a few non-US residents who resent this strategy.

So what’s the solution? The 3Com gateway offers a very good alternative:

Notice how the gateway groups the countries by region, thereby avoiding any patent displays of favoritism. The site also presents the countries in their native languages – a huge usability boost.

Granted, the page only includes a fraction of the countries that the FedEx menu includes, but I believe that it could be expanded to include an equal number of sites.

While I realize that the pull-down menu takes up very little real estate, it’s simply not a valid solution for global gateways. For our recent presentation on this hot topic, check out The Art of the Global Gateway.