At 37 languages (in addition to English), Hotels.com is not the language leader in travel, but it’s near the front of the pack. And the company has been a leader  in localizing its websites and apps for mobile web users. Most important, the company maintains a high degree of language parity across devices — an emerging best practice that most companies today overlook. In other words, if you support Russian on your PC website, you had better support it on your mobile app as well. The company also does a good job of ensuring that its mobile sites load quickly, by stripping out extraneous visuals. Performance is another area that is too often overlooked. Today’s New York Times has a good article on  how one second can make a difference in the success of a web or mobile site. 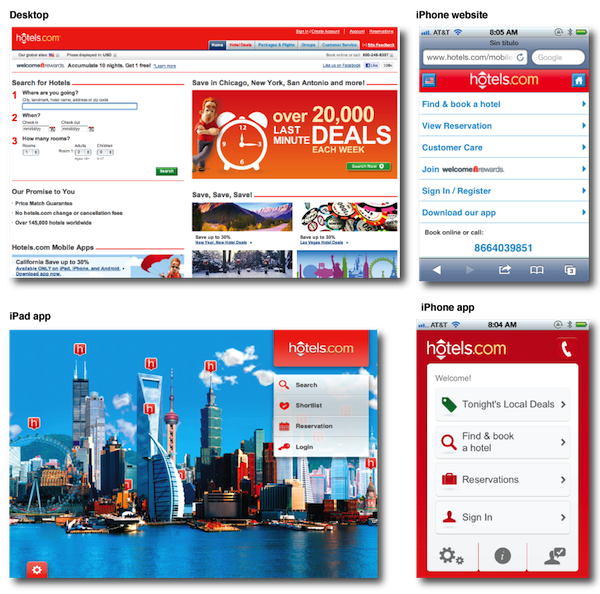 Global consistency has been key to the company’s success — even though there is still room for improvement. The company recently announced the rollout of a globally unified marketing platform beginning with the logo.

You can see the old US logo above and the Greek version here:

And here is the brand new logo below: 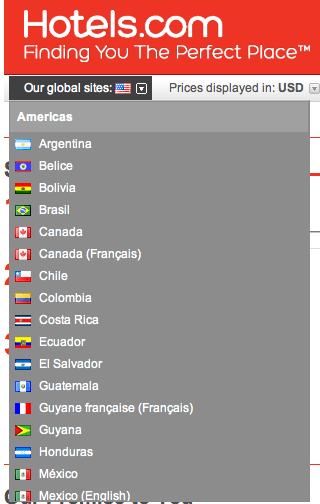 A note about the global gateway. As readers of this blog well know, I’m no fan of using flags — particularly to denote languages, that is. But Hotels.com uses flags to denote countries, which is not so bad. In fact, I have often argued that flags can be valuable when it comes to ecommerce — as it provides users a degree of comfort that they are indeed on their local website.

That said, I think Hotels.com should remove the flags — at least within the global gateway list. There are a few reasons for this. First, the flags do not improve usability. When there are so many, the result is just a chaotic mix of colors. When I scan the list I often miss the US flag (which is partly due to how the countries are organized).

Finally, there are several “Rest of …(region)” websites included within the list, and instead of a flag we see an empty rectangle.

Apple, by the way, has a similar problem with its use of flags.

But all things considered, Hotels.com is a company worth studying — particularly regarding its global mobile strategy.