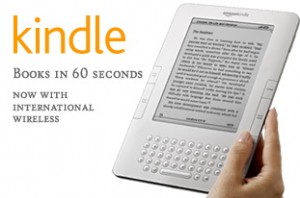 The Kindle has gone international, sort of.

That is, Amazon is launching a new Kindle outfitted with a radio chip that works in most of the world’s cellular markets (100+) — as opposed to the US-only Kindle, which operates only on Sprint’s network.

Unfortunately, just because someone in, say, Russia will be able to download a book, doesn’t mean that the book itself will display Cyrillic characters.

You see, even though the Kindle may operate in much of the world, it is still a Latin-only device.

I learned this the hard way when I helped adapt Forgetting English for the Kindle. For example, in the short story First Sunday the Tongan line “Pou’li ā, Sione” came out as “Pou’li a, Sione” — minus the ā.

That’s because “ā” and many other extended Latin characters won’t display properly. Needless to say, Russian, Chinese, Arabic, and Japanese aren’t going to have much luck either. Based on my parsing the sparse documentation on the Amazon site, I understand the issue isn’t a lack of Unicode support but a lack of font support.

Apparently you can use this Unicode hack to get your Kindle to display non-Latin characters, but this is hardly a mainstream solution. People shouldn’t have to download their own fonts to display the books they want to read. Basic font support in an e-reader is, well, something you would expect to find installed by default.

I’ve since come across a number of people who develop books for the Kindle who aren’t exactly happy about the situation.

Why doesn’t Amazon include a Unicode-friendly font on its device? Perhaps this was by design, to save on memory. After all, a Unicode font can easily weigh more than several MB, which takes away from precious book storage space.

My opinion is this: Amazon didn’t design globallay from day one. And that’s a shame for readers and writers alike. When you compare the Kindle with the iPhone, which supports more than 30 languages, I can only say that I’m looking forward to the coming of the iTablet.

3 thoughts on “Kindle goes international, but not multilingual”