When an organization begins offering Web content in multiple languages, it must decide how best to direct Web users to these languages.

The global gateway is a term I began using a number of years ago to refer to all the visual and technical devices a Web site may employ to direct users to local content quickly and seamlessly. Elements may include everything from a country specific domain name (such as www.amazon.fr) to a splash global gateway to geolocation.

But I want to focus on e visual device that is used quite frequently in the global gateway: the national flag.

See how Toyota uses flags as links to the many country-specific Prius Web sites: 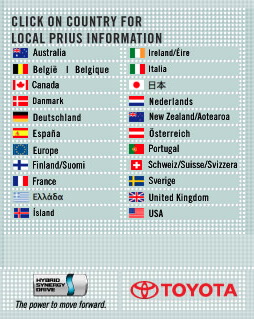 This Web site offers three languages: English, Italian, and German. The links to the languages are located in the region I call the “sweet spot” — the upper right corner of the Web page. Here is a detailed view:

I’m finding that more and more Web sites are positioning their global gateways in the sweet spot – a good move, because not only is this position highly visible, but more and more Web users are being conditioned to look for global navigation within this region.

Unfortunately, the flags themselves create the impression that the Web site is more exclusive than I imagine it was intended to be. The British flag is naturally used to denote English, but does this mean this content is not meant for Americans, Australians, and others? You get the idea. In truth, there is no flag that can adequately denote English any more than a flag that denotes Spanish.

So what should Live 8 have done instead of using flags? While it is not quite so visually engaging, plain old-fashioned text would have sufficed. Just be sure that the text is displayed in the Web user’s language, such as Deutsch instead of German.

Some of us in the localization industry would recommend that companies avoid using flags altogether. I’m not quite so adamant against them because I have seen them aid in usability. The key, however, is in knowing when they will impair usability.

1 thought on “Of Flags and Languages: A Live 8 Case Study”