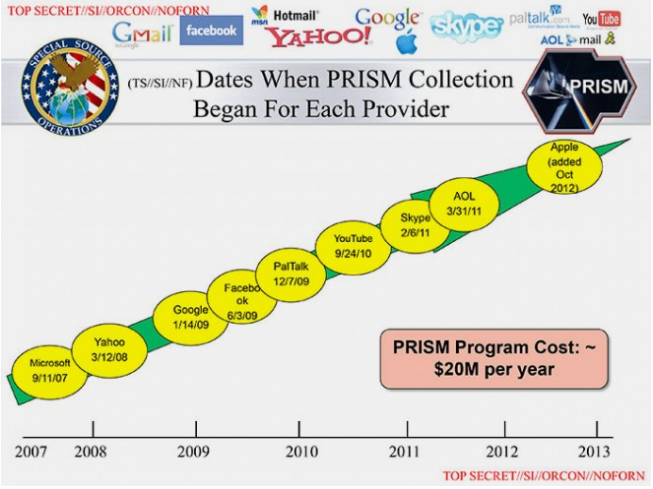 When I read government arguments in defense of the NSA, an oft-repeated line was:

I really dislike that word.

Because 80% of Google’s customers are foreigners.

More than 50% of Microsoft’s revenue come from foreigners.

Most of Facebook’s users are foreigners.

Apple gets more than 12% of its revenues from China.

And now these foreigners are well aware that their emails and texts and Facebook posts may have been scanned by the US intelligence industry.

I was asked by a tech company recently about what factors could disrupt their current globalization plans in the years ahead.

The NSA was at the top of my list.

We now see a rush of new and established tech companies around the world to create services that are located entirely out of reach of the US government (no matter how impractical this may appear). According to this WSJ article (reg required):

Three of Germany’s largest email providers, including partly state-owned Deutsche Telekom AG teamed up to offer a new service, Email Made in Germany. The companies promise that by encrypting email through German servers and hewing to the country’s strict privacy laws, U.S. authorities won’t easily be able to pry inside. More than a hundred thousand Germans have flocked to the service since it was rolled out in August.

So what does the COO of Facebook have to say about this?

“We should all be nervous when countries impose costly new requirements on companies as a condition of serving their citizens,” says Facebook Chief Operating Officer Sheryl Sandberg. “It means fragmenting the Internet and putting the economic and social opportunities it creates at risk.”

For start-ups around the world, this news is actually good news. From the same article:

The fact is, the Balkanization of the Internet is not a new trend, but the NSA (no thanks to Snowden) accelerated it.

Do foreigners care about their email being scanned?

If the Germans are a leading indicator, perhaps so.

Though this article would indicate that Europeans largely are not concerned about the goings on of the security agencies. After all, it wasn’t just the US government at work here; there were other governments involved.

But I think the threat to US-based tech companies is real (perception, after all, is reality). I think the impact will be felt years from now, when there are new and competitive service providers taking a distinctly local approach to their offerings. This is where global service providers get uneasy. It’s difficult to compete with a “local by design” business when you are a “global by design.”

The sad part about all of this is that China — the poster child of Internet privacy violators — suddenly doesn’t look all that bad.

UPDATE: US tech leaders visited Washington, again, and warned of the Balkanization of the Internet.

3 thoughts on “How the NSA is threatening the future of Google, Facebook, Amazon and others”