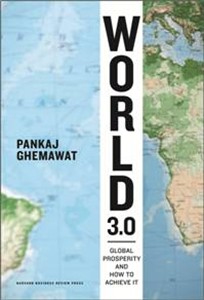 I received an advance review copy of Pankaj Ghemeawat’s new book World 3.0: Global Prosperity and How to Achieve It.

I greatly enjoyed his previous book, Redefining Global Strategy, calling it a valuable counterpoint to Tom Friedman’s book The World is Flat.

In his newest book, Pankaj sets out to chart a course forward that balances global integration (globalization) with regulation.

In light of the global recession, Pankaj does not want to see countries revert to an all-or-nothing approach to globalization — either embracing globalization with no checks or balances or completely closing the door to trade, immigrants, ideas, etc.

Of course, charting such a course requires making sense of a world that cannot be easily summarized in sound bites — something most American politicians seem unable or unwilling to do. The fact is, the globalization “train” has long ago left the station. We’re all connected, whether we like it or not. We can either choose to create relationships that benefit everyone or we can live with the outdated mindset that some countries must win at the expense of others. What I really appreciate about Pankaj’s writing is that he believes that globalization (properly regulated) can benefit everyone and he backs up these beliefs with plenty of data and recommendations for politicians, business leaders, and ordinary folks like myself.

What I most liked about this book was how Pankaj debunks popular misconceptions about globalization, which he calls “globaloney.” For example:

However, I think Pankaj does a bit too much debunking at times. Pankaj says that the “race to the bottom” of countries focusing on low costs at the expense of the environment, human rights, etc. simply does not exist. I disagree. He focuses on pollution largely but there are so many other issues that should be addressed.

For instance, factory farming is, in my view, an absolute atrocity and it is now being exported around the world via US trade agreements. That is, when the US exports meat that has been produced cheaply via factory farming, local farmers in other countries are forced to embrace factory farming to remain competitive or go out of business. A number of Korean family farmers committed suicide in protest of the recent trade agreement between South Korea and the US. Pankaj vastly trivializes these so-called “externalities” and, in doing so, overlooks what is one of the great (and growing) forces mobilizing against globalization.

That said, I recommend this book. Pankaj is one of a handful of writers who are tackling globalization, warts and all, in a thoughtful manner. Globalization is not a black and white argument; there are many shades of gray and this book does a very good job of shedding light on them.

2 thoughts on “World 3.0: Making Sense of a Semi-Global Planet”