It doesn’t have backlighting. It doesn’t natively support PDFs. And it’s not cheap.

And yet I still ended up getting the Kindle.

It’s thinner than I expected and I really get a kick of how it never is “off” in the conventional sense. When you turn the device off you typically get an illustration of a famous autho. 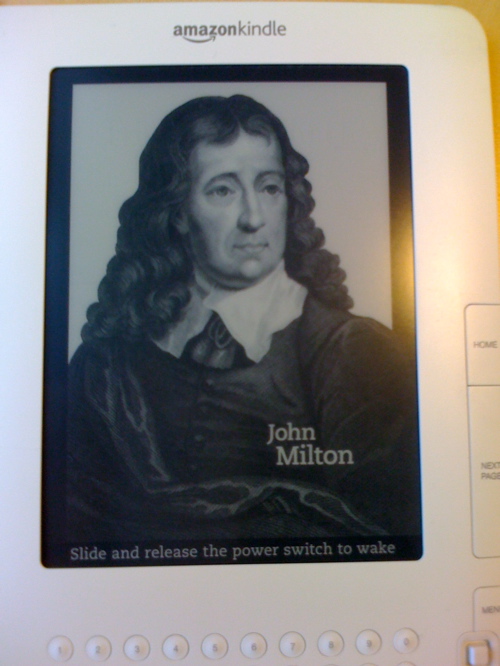 The interface is usable enough, but there is plenty of room for improvement. It was funny to watch my wife try it for the first time. She touched the screen to select an option — a sign of what the iPhone is doing to us all. I felt the urge to touch the screen as well. This makes me realize that Apple is going to do something just like the Kindle eventually (maybe sooner than later). Perhaps power consumption is the big obstacle. But it’s hard to see any hand-held device not going “touch” in the years ahead.

I LOVE the embedded dictionary. If you set the cursor next to a word you don’t understand, the definition appears at the bottom of the screen. I’m going to learn a lot of words that I was simply too lazy to look up these many years.

But the reason for getting the Kindle wasn’t to expand my vocabulary so much as to save shelf space.

Since downsizing my life back into an apartment, I’ve realized that I can’t keep acquiring books. I love books. I adore books. But I only have so much room for books. And I don’t like to get rid of them once I’ve acquired them.

I’ve found that I’ve resisted buying books simply because I’m running out of shelf space. With the Kindle I can now read those books that may not be “bookworthy” enough to take up precious space on a shelf.

The good news is that I can continue buying those print books that I can’t live without, my wife’s book included — but it’s nice to have a choice.

I also am now making good use of ManyBooks, an excellent repository of copyright-free books in a number of formats. I don’t think I would have ever purchased White Jacket by Herman Melville, but I just downloaded it.

Moby-Dick is clearly bookworthy, but is every Melville book? The Kindle gives me the opportunity to preview a book before buying the “real” print version. Amazon provides a preview option with books as well.

And, yes, I could have done the same exact thing on my PC, downloading PDF versions of all these classic books. And I have already downloaded a number of books in PDF form. But I just don’t read books on a computer, even a laptop computer. There are too many other distractions — email, news, facebook, this blog!

With the Kindle, all you do, for the most part, is read. And I like that.

As a writer — one who has a novel of his own that he’d like to see in print form one day — the Kindle is a mixed blessing. I agree that this device and the many to follow represent the future of reading for the generation that doesn’t even get a newspaper delivered to the door each morning (I’m still clinging to my daily New York Times).

I don’t believe the Kindle will eliminate books, perhaps a few mainstream bookstores, but not books.

But I do feel books becoming “content” now that they are digitized, along with music and movies and anything else that will fit on a flash disk. In fact, I don’t even view the books on my Kindle as books. Books are those objects on my shelves, that I’ve dragged with me from city to city — some as long as 30 years (I still have a few Hardy Boys books, even a Nancy Drew).

It’s an odd feeling to be caught between two technologies. The print books were once cutting edge — and now we have the digital equivalent.

I guess in the end all that matters is that people keep reading. And if the Kindle achieves that goal, so be it. I certainly find myself reading a bit more since getting it.

3 thoughts on “The Kindle forces the question: Is it bookworthy?”