It was just over a year ago that Facebook started localizing itself for the world.

As I noted then, the company utilized crowdsourcing to spur its translation efforts. And though volunteers aren’t the only people translating content, a year later, Facebook has done an impressive job of going global. 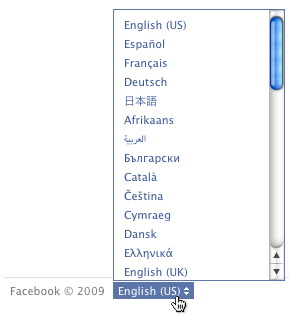 Even though only 43 languages are available now, if you add the Facebook Translations application (which i really recommend doing if you’re into this sort of thing), you’ll see the other 60 languages in the pipeline — many of which look pretty much good to go.

So many languages my computer is lacking for fonts.

It’s a very safe bet to say that Facebook will support more than 100 languages a year from now.