China’s Alibaba is the creator (and exporter) of this one-day ecommerce extravaganza that takes place on 11/11.

And despite being a one-day event the pre-promotion is in full effect.

According to brandchannel, Alibaba is intent to set new records this year by expanding beyond China’s border. Its long-term goal is two billion shoppers, so they have no choice but to look outside mainland China. This year they’ve recruited Katy Perry as their spokesperson. 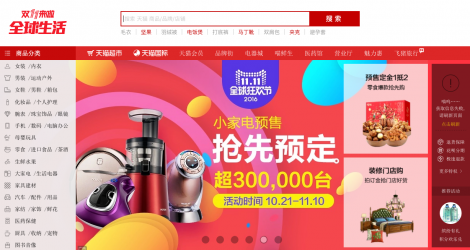 Amazon recently launched Prime in China. But Amazon is just a blip compared to Alibaba.

Costco has been a partner for several years and apparently did 3.5 million in sales two years ago. Here is their Tmall home page. Costco does not even have a localized website for China — just a Tmall site, which is effectively the same thing when it comes to China. The benefit of a Tmall site is that you’re hosted within the country, bypassing the great firewall. And you get built-in marketing and support from Alibaba.

Now, will Singles Day take off in the US?

When it comes to ecommerce, I’d say anything is possible. We Americans love any opportunity to shop. And perhaps with the growing backlash against Black Friday, this will one day become the next big shopping day.