Airbnb is one of the hot new travel web service startups.

It basically lets you rent out your spare bedroom or look for a spare bedroom when you travel. That’s how it started out; now it is expanding to include luxury home rentals.

It is also expanding around the world, which has given rise to an ugly “mutant flag” in its global gateway.

Here it is in the Airbnb header:

It’s that hybrid British-American flag. I wasn’t aware that our two nations had merged recently.

But seriously, I don’t doubt that that people “get” what this mutant flag is trying to convey — English.

And yet the use of flags to denote language is almost always a bad idea.

Because if you scroll down the list you run into another world language — Spanish. 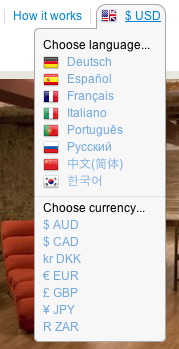 And yet this language is denoted by only the flag of Spain. Should this flag also be a mutant flag, with pieces of flags from Mexico, Argentina, and other countries blended in?

That’s the inherent flaw of using flags to denote language. Whatever usability gains you may see by people recognizing their country’s flag is outweighed by the fact that so many other flags must be left off. There are many English-speaking countries and yet only two are represented by the mutant flag.

As an alternative, I recommend leaving the languages in their native language (as Airbnb already does), and adding a globe icon at the top of the menu (to let people know there are options available).

On a positive note, Airbnb wisely makes use of language negotiation — detecting the web browser language setting and responding with the matching language (if available). I’ve written about how this really pays off for mobile web browsers.

For more on global gateways, check out The Art of the Global Gateway.

2 thoughts on “Dear Airbnb: Please take down your mutant flag”