eBay has invested significantly in web localization over the years and it is a top-20 website in countries such as France, Italy, and the UK (Alexa).

But it could do more to help more people find these local sites.

Between January and March of this year, eBay updated its global gateway.

I’ve included screen grabs of the before and after gateways below. In both cases, eBay’s gateway is positioned at the bottom of the global (.com) home page. This new design has not been rolled out to all markets yet. 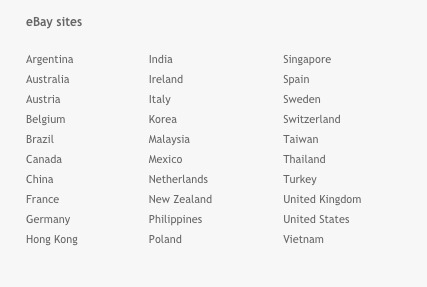 The second version looks a good deal more elegant than the first, which is an improvement. But I doubt the new version is significantly more effective than the earlier version.

That’s partly because the country names remain in English, as opposed to being translated into the supported language of each market. And this is a shame because a casual observer might assume that these country sites are available only in English, which is not the case.

For example, if you speak only Chinese and you arrive at www.ebay.com, you have to recognize “China” to get to actual Chinese-language content.

Below is the gateway from eBay Germany. I include it here to illustrate how eBay has “over-localized” the gateway. 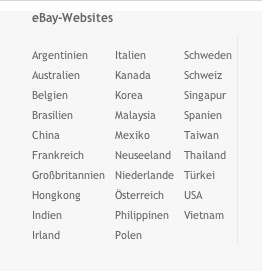 That is, the country names have been localized for German speakers. But the irony of this global gateway is that there is not much of a reason for a German speaker to navigate to, say, the Chinese site. Instead, each country site should be displayed in its respective language — or languages if more than one is supported. The upside to this approach is that this gateway doesn’t have to change from local site to local site.

Now, just to put eBay’s navigation in perspective, I assume that the majority of visitors to the local sites enter through the “front door” of ccTLDs, such as www.ebay.fr and www.ebay.de. So what I’m highlighting here is not a critical flaw in the greater scheme of things, but it’s a flaw nonetheless.

So what do I recommend?

You get the idea.

Next, I would promote this global gateway to the upper right corner of every eBay site. Not the entire panel as it exists now. Just a globe icon that links to a global gateway page. This way, users can easily find or change their current country setting.

And I’d begin testing geolocation as a way to direct people seamlessly to their local sites based on IP address. Geolocation has become much more popular over the past two years. In our 2010 Web Globalization Report Card, more than 25% of the sites studied use geolocation specifically to improve global navigation.

That said, geolocation should never be used before a company has its visual elements in place, which eBay does not (yet). Users hate nothing more than a web site that does things without the user having control over them. Google is famous for this.

In case you’re wondering, eBay was ranked 114th out of the 225 sites reviewed in our Report Card. The site actually scored quite highly in both global consistency and localization, but navigation remains a weak spot.