For translation crowdsourcing to work, first you need crowds.

And TED, which has been using the crowd to provide translation of its videos, is looking for a few more participants. Here’s a recent blog posting:

Wanted: Translators
The goal of TED’s Open Translation Project is to bring ideas worth spreading to the wider world by offering TEDTalks with subtitles in as many languages as possible. Still, many of the world’s languages aren’t yet represented in the project, and we want to fill those gaps. Today, we’re putting out a call to translators worldwide to help us translate the languages that the project hasn’t yet covered.

We’re looking for translators who speak these languages, in particular:

In some cases, translations in the languages above have already been completed, but remain unpublished because they still need to be reviewed. (Some of the languages only have one translator.)

These languages aren’t exactly what the translation industry would call Tier 1. That is, there simply isn’t as deep pool of translators to draw from. Which is why any crowdsourcing strategy must take into account the size of the potential crowd.

So how is TED doing so far with its crowdsourcing project?

This menu should give you an idea of what languages are covered and to what extent. Chinese and Brazilian Portuguese are doing best by far. 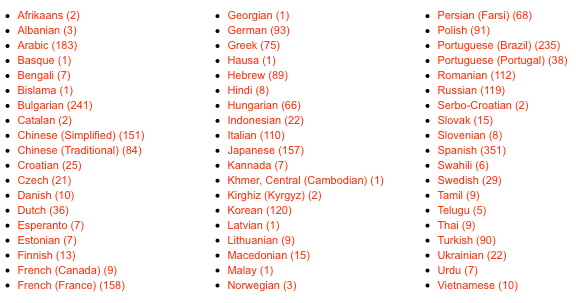 For roughly six months of work, TED appears to be doing quite well.

2 thoughts on “TED is looking for a few good translators”