Whenever I read this site’s web logs, I’m always fascinated by the number of referrals via Google Translate.

Every month there seems to be more of them, which could mean that the quality of Google Translate is improving, or this site is doing better in the rankings, or some combination of the two. Or, it could be simply be that more people have discovered Google Translate.

Given my passion for country codes, it’s fair to say that I also enjoy language codes. And it is through language codes that you can figure out what languages users were translating your site “from” and “to.”

Here is one referral string from my site:

That was an easy one.

This next one is a bit more challenging:

This person was using Google.com, so you have to focus on the language codes. There are two here — an “id” (which follows  “hl=”) and an “en” (which follows “sl=”). What this means is the person was translating from English into Indonesian (Bahasa Indonesia). 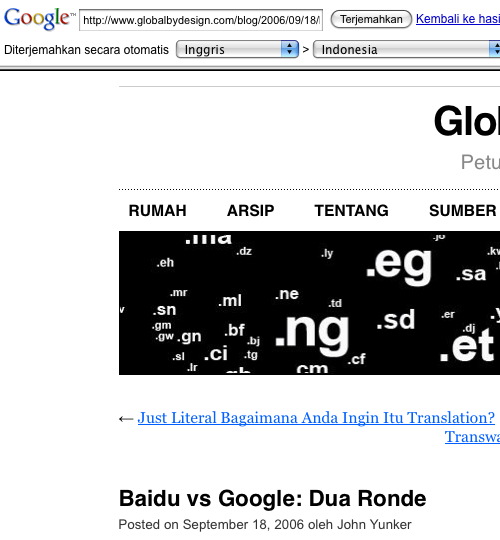 And here is a language code reference if you want to study your web logs.

What I want to know is what percentage of web traffic is taken up by Google Translate. Anyone care to share their Web log stats?

Based on my cursory analysis, I would estimate the figure to be between 5% and 10%, but that’s very rough.

2 thoughts on “Decyphering Google Translate on your web logs”