Congratulations to Spain for emerging on top of Euro 2008. I can’t say that I was pulling for any one team, but I would have loved to have seen Germany score a last-second goal to keep the tournament alive.

Being the globalization geek that I am, I couldn’t help but check out the home page of Yahoo! Spain, which features a localized header, shown here:

And then I noticed that the home page of Yahoo! Germany was also localized for the home team.

So who the heck was Yahoo! rooting for?

Which highlights a delicate issue for multinational Web sites — that of not appearing to root for one country over another. The golden rule of course is to simply treat each country equally. This is easy to do when it comes to localizing headers, but not so easy when it comes to providing equal levels of customer support, product documentation, and so on.

Yahoo! is not alone in navigating these waters. Here is Google Germany: 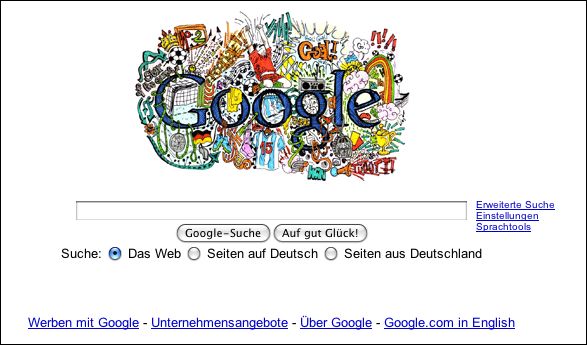 Interestingly, you can’t view this German page by simply entering google.de. You need to use a German-based IP proxy.

Here is the Euro site, with support for 9 languages.

And here is the Olympics site, with support for just English, French, and Chinese.

I find it ironic that an event that is billed as a global event supports fewer languages than an event that has Euro in its title. Euro 2008 even supports Japanese, Chinese, and Korean even though these countries don’t have participating teams.

I realize that the Olympic Charter specifies just two official languages: English and French. And the host country generally adds its local language to the mix as well. This rule makes sense for signage, announcements, etc. But I don’t see why the Web site should support only three languages.

The argument can be made by the Olympics that they simply cannot justify financially supporting every language of every participating country. But I still don’t buy it. If Euro2008 can support 9 languages, the Olympics can and should do better than three.