What began as just another “gisting” application — like Babel Fish — is gradually becoming an impressive translation tool. And I’m not referring to the quality of translation, though that is improving as well.

I’m referring to the breadth of languages and breadth of features that Google Translate supports.

And that’s not all!

Google Translate also now provides a detect language tool that will tell what language a batch of text is in. This type of tool can come in awfully handy for people like me who navigate across so many languages on a daily basis. It’s an easy feature for Google to support because the translation engine needs to know what the source language is before translating it. But I also tested language detect on a few languages not yet supported for translation, such as Slovakian, and the engine correctly identified them.

A week ago, I integrated Google Translate into the home page of Byte Level: 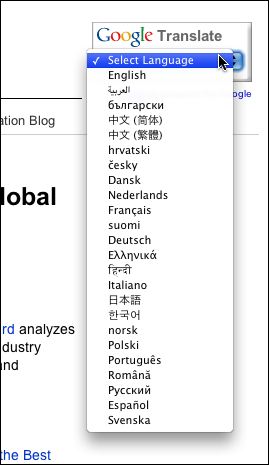 When it comes to translation, I’m not a good example of “putting my money where my mouth is.” Byte Level Research, with the exception of the Tower of Babel site, has been available only in English for years.

While I have no illusions that this widget will make up for a lack of professionally translated text, I am curious to see if people use it and to what extent. What I need to know is if Google Analytics can track Google Translate widget usage so I can know which languages are most popular. If anyone knows how to set this up, please contact me.

And, if nothing else, it’s an interesting experiment — and it buys me time before having to shell out real money for professional translation, which I will ultimately need to do.

10 thoughts on “Google Translate is growing up”