I’m pleased to announce the publication of the 2007 Web Globalization Report Card.

This report — now in its fourth edition — rates how successfully companies develop Web sites for international markets. we look at things such as number of languages offered, depth of localization, global consistency, and global navigation. 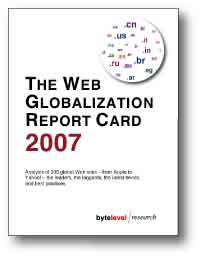 Out of the 200 Web sites reviewed, here are the top 10 global Web sites this year:

Google has become a regular in the number one spot. But it’s not just because of its 100+ language search interface. It is the rapid localization of the many Google software applications that has kept this company on top.

Wikipedia proves that you don’t have to be a large corporation to successfully communicate with the world — the Web site offers content in 250 languages. It does, however, help to have a network of dedicated volunteers around the globe creating all this content!

Cisco Systems moved up in the rankings this year thanks in part to a redesign.

And Philips, Microsoft, and Seagate broke into the top 10 this year.

Also worth noting is the popularity of splash global gateway. Nearly a third of the 200 sites now use some form of splash gateway page specifically to aid in global navigation. The splash gateway has gone mainstream. But it is not a standalone solution to global navigation; companies are also increasingly using geolocation and language negotiation, which I highlight in the report.

I’ll have more to say in the weeks ahead. For now, congrats to the top 10 sites.

PS: Here is the press release.