The domain name system (DNS) was built by geeks for geeks. It was never intended to be all that user friendly — and, for many people, it’s not. That’s one reason why search engines have come in handy — because they function as a more usable front-end to the DNS. I can’t count how many times I enter a company name into Google instead of trying to guesstimate its URL in my browser window.

So what’s the solution?

A few years back we saw RealNames launch a workaround to the DNS in which companies could register their company name and all the Web user needed to do was input the company name. RealNames imploded in 2002 but I believe the technology is still being supported by somebody; I just typed a few brand names into my Safari browser (BMW, Coke, Apple) and was taken immediately to their corporate sites.

Today, I came across a press release from a company that is trying to do basically what RealNames did, only it appears to be a lot less usable. UnifiedRoot is developing a parallel DNS that would allow you to register a domain that completely bypasses the DNS we know and love, as illustrated below: 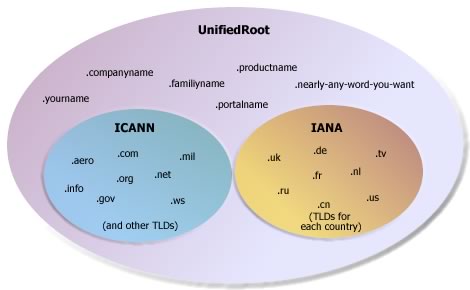 I don’t see the value of this system. Large companies are going to register every country domain they need for IP reasons alone, so it can’t be a cost issue. I could be missing something here, but so far it doesn’t seem much easier than relying on Google.

What I think UnifiedRoot missed is the huge untapped potential for serving domains in non-Latin scripts, like Arabic, Cyrillic, and Chinese. The current solutions in this area are little more than hacks, and although the folks at ICANN are working on a long-term solution, they’ve been working on it for half a decade and still have a ways to go. It has to do with the immense complexity of migrating the DNS to Unicode and the numerous potential security issues that would result.

So while I’m glad to see UnifiedRoot taking a shot at building a better DNS, they’re not there yet.