And now for the sobering aspect of my trip to the Antarctic. The naturalists on board our ship told us that the water temperature in the region has increased a few degrees over the past 50 years. This change seemed trivial at first, but I gradually learned that it was actually quite dramatic. They believe the higher temperature increases the amount of snowfall, causes ice sheets to break loose, and ultimately wreaks havoc on many of the animals.

On our last stop, we visited a colony of Gentoos, shown here. 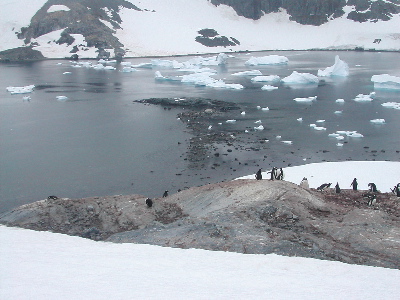 Apparently these little guys got a very late start on breeding. We hardly saw any chicks, and we were told that most of the ones we did see would not survive very long. Penguins have to wait until the snow melts off their rocky nests before they start breeding. But if there are increased amounts of snow, which our naturalists have noticed over the years, the penguins fall behind schedule. A late start is often fatal for the chicks because they don’t get big enough to survive on their own; their parents, who need to molt and stock up on food for their own survival during the rapidly approaching winter, are forced to abandon them. Penguins have a very narrow summer window in which they can breed, and I worry that their window will someday close.

It was a very sad sight. Now I must stress that our naturalists are quick to not to blame these occurrences strictly on global warming, but I think they are being diplomatic.

The Intergovernmental Panel on Climate Change has been covering this issue for some time.

I recently read its 2001 report on “Impacts, Adaptation

and Vulnerability.” The section on the polar regions notes:

What does this all mean? Here are the impacts noted in the report:

Substantial warming and increases in precipitation are projected for polar regions over the 21st century by almost all climate models. There are eight key concerns related to the impact of this climate change in the Arctic and Antarctic. Associated with these concerns will be changes to the atmosphere and the oceans that will propagate to other regions of the world:

I agree that you can’t blame the death of a penguin chick purely on an SUV, but I also believe that extra pollution in one part of the world does have an effect on other parts of the world. In America, we make a very big deal about second-hand smoke; we still have a ways to go before we make global second-hand smoke a priority.