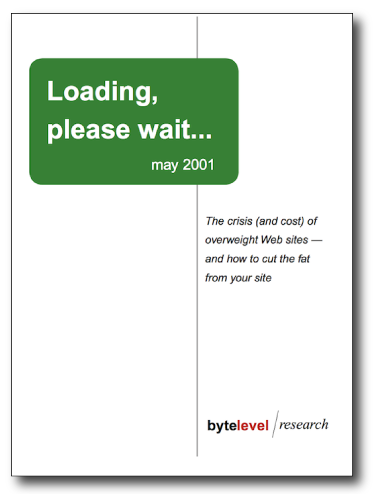 Why, may you ask, was I researching website weights all the way back in 2001?

At the time, in the United States and many other countries, homes and businesses were in the process of upgrading from dial-up internet connections to broadband connections. Because businesses were on the leading edge of this upgrade, many web teams designed fancy new websites that relied heavily on images and this fancy new technology known as Flash. But at the time just 5% of US homes had broadband connections, so they were forced to wait 30 seconds and beyond for many of these fancy new web pages to display.

For example, in 2001, the home page of Wal-Mart weighed 238 kilobytes, which, for a dial-up internet user, required up to a 30-second wait for the home page to display.

Around this time period, a startup was emerging that prioritized speed to such a degree that its home page subsisted of nothing more than a few words of text and a logo, weighing all of 13 kilobytes. It’s home page loaded in less than 3 seconds.

That startup was Google.

The Google home page weighed less than half of the Yahoo! home page, and users noticed. It wasn’t just the quality of search that won Google its customers, it was the responsiveness of the interface.

Here is the weight of the Google home page in 2001 (blue) compared with today (in green). Google now comes in at a whopping 550 kilobytes (on average). But you don’t have to look far to find websites that weigh many times more than Google, such as IBM and Microsoft and Amazon. 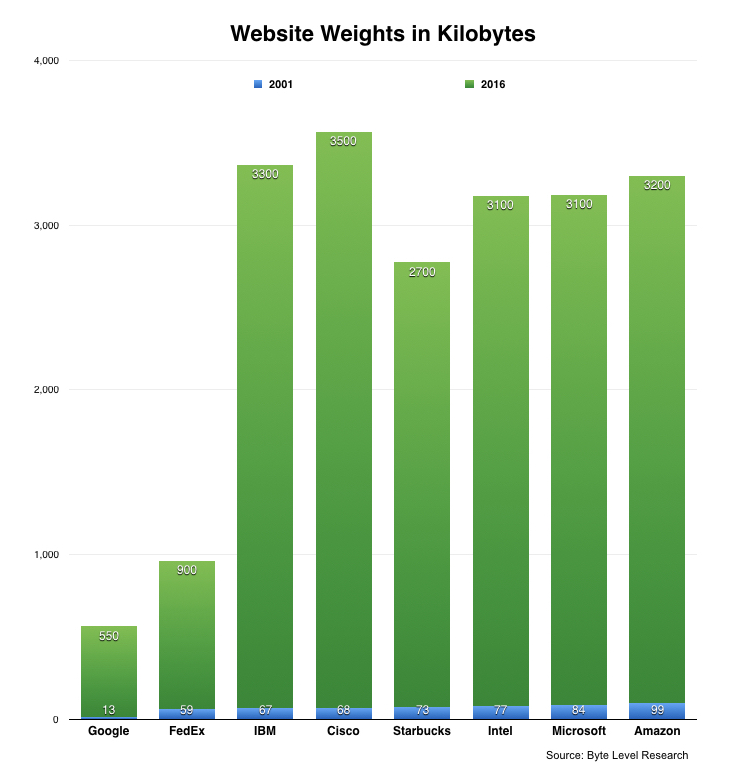 Not everyone has a high-speed connection

So let’s say you have a smartphone on a 3G network — which represents vast portions of China and most emerging countries, such as Indonesia and Turkey. A web page that weights more than 3 MB could take anywhere from six to 10 seconds to load. If you want your website to display in under the coveted 3-second threshold, you would be wise to keep your website under 1MB.

Based on my research for the Web Globalization Report Card, mobile websites have been steadily increasing in weight. Just over the past two years they have nearly doubled in weight. 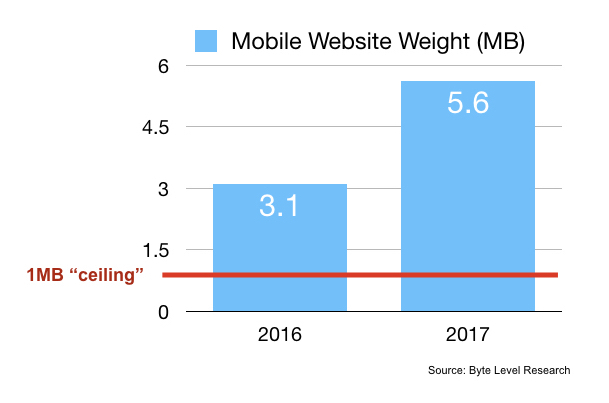 Mobile website weight is now one of the many elements that factor into a website’s total score.

If you want to better understand the speed of Internet connections around the world, check out the Speedtest global index.

The Speedtest Global Index compares internet speed data from around the world on a monthly basis. Data for the Index comes from the hundreds of millions of tests taken by real people using Speedtest every month. To be included in the Index, countries must have more than 3,333 unique user test results for fixed broadband and more than 670 unique user test results for mobile in the reported month. Results are updated at the beginning of each month for the previous month.

Here’s an excerpt from October:

So while Norway currently leads the pack with nearly 60Mbps, Brazil comes in at 15Mbps. And Brazil is far from alone at the bottom half of this list.

All the usability testing in the world is meaningless if your customers can’t quickly load your website or mobile web app.

Get your mobile website under 1MB and you’ll be well positioned against the competition — and you’ll be better serving your customers. Get it under 500 kilobytes and you’ll be on par with Google’s home page; not a bad place to be.