I’m excited to announce the publication of The 2017 Web Globalization Report Card. This is the most ambitious report I’ve written so far and it sheds light on a number of new and established best practices in website globalization.

Here are the top-scoring websites from the report:

For regular readers of this blog, you’ll notice that Google is yet again ranked number one. But Google isn’t resting on its laurels. While many software companies are happy to support 20 or 30 languages on their websites, Google continues to add languages across its many products. Consider Gmail, with support for 72 languages and YouTube, with 75 languages. And let’s not overlook Google Translate, now at 100+ languages.

Google could still stand to improve in global navigation, though I am seeing positive signs of harmonization across its many product silos. But I do maintain the recommendation that Google present a more traditional global gateway to visitors across its sites and apps. 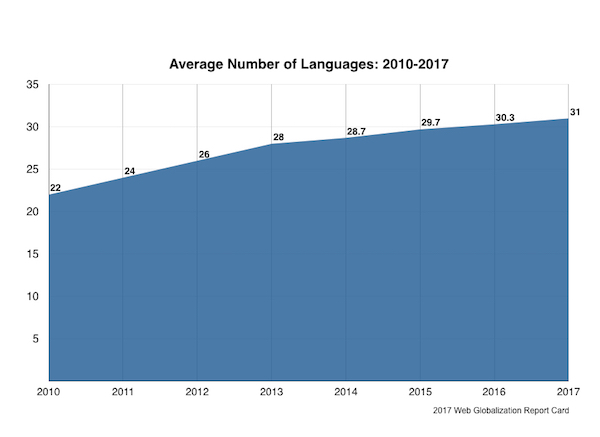 But as you can see here, the rate of language growth, on average, is slowing. That’s not necessarily a bad thing. Companies are telling me that they are investing more on depth and quality of localization — which is of huge importance.

The data underlying the Report Card is based on studying the leading global brands and world’s largest companies — 150 companies across more than 20 industry sectors. I began tracking many of the companies included in this report more than a decade ago and am happy to share insights into what works and what doesn’t. Time is often the greatest indicator of best practices.

I’ll have much more to share in the weeks and months ahead. If you have any questions about the report, please let me know.

Congratulations to the top 25 companies and the people within these companies that have long championed web globalization.