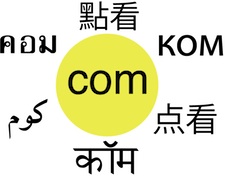 As an owner of many .com domains, I’m certainly a fan of the domain.

And I’d be hesitant to launch a new brand or company without first securing one.

But if I were based in, say, Indonesia, would I care as much about .com? Would I prefer to register the country code .ID?

And if I were to launch a purely mobile company, would my domain matter at all? Have we reached a point in time where the next wave of the world’s largest companies will exist largely domainless? It’s certainly feasible. Visit the website of Shapchat and you don’t get the software application; all you get is blinded by a highly annoying shade of yellow. Granted, Snapchat is hosted at .com, but it could have just as easily been hosted at .XYZ.

Which brings me to Google, which hosts its new parent company Alphabet at abc.xyz (Google does not own alphabet.com).

I don’t want to read too much into this domain in particular, only to mention that the rules today have changed.

That said, I largely agree with Paul Graham regarding .com. There are plenty of legal reasons to lock up the domain. And, for better or worse, the .com domain is considered a global domain name (and, by most Americans) an American domain name.

But my point is this: Don’t view .com as your only domain name. Don’t overlook country codes and IDNs as you build out your global presence.