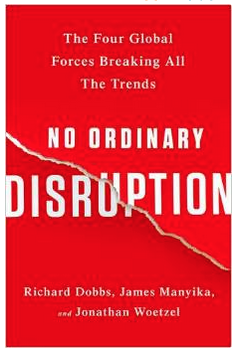 I was given a review copy of No Ordinary Disruption: The Four Global Forces Breaking All the Trends, which I read over the weekend. The authors are Richard Dobbs, James Manyika, and Jonathan Woetzel — all directors at the McKinsey Global Institute.

Readers of this blog are not going to be surprised by some of the disruptions highlighted by this book, namely the enormous impact that emerging economies are having on global brands (and future global brands). In fact, I doubt readers will find any of these four disruptive forces to be unique.

But what’s unique is how the book ties these four major forces together in a book that’s packed with insights and anecdotes while remaining free of management-speak.

Don’t expect this book to give you any concrete secrets about how to successfully navigate these forces — the authors rightfully point out that there are just too many variables at play to know exactly what this future world will look like.

What this book excels at is quickly summarizing these forces and the challenges they pose to businesses and policy makers. And using real-world examples to illustrate these forces.

I enjoyed the many visuals included in the book, such as this one, illustrating this shifting of the economic center of gravity: 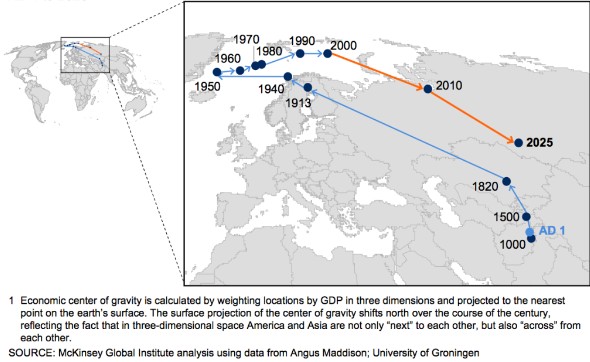 From a web globalization perspective, a few parts of the book jumped out at me, such as:

The authors want this book to help you “reset your intuitions” about the world as you know it. For instance, we can’t think of China as a country with two large cities. It’s a country with numerous cities that rival many European countries in population. And we need to be on the lookout for opportunities (and threats) in countries that we may have overlooked in years past. There are a number of African countries, for example, that Chinese companies are now heavily invested in. And companies are learning that products and distribution strategies that succeed in emerging economies often have little in common with what works in more developed economies. These lessons are important to learn earlier than later!

Perhaps the most important message the authors deliver is one of staying curious and adaptable.

These are traits that make successful managers of global websites. After all, we can’t know what’s around the corner with any degree of certainty. But by keeping a curious and open mind you will be prepared to ride these waves as they come along.