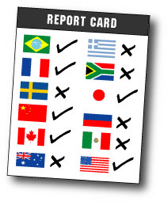 You can be a wildly successful global company and still have a poorly localized website.

A number of factors determine global success and the website is only one of these factors — unless of course you’re an Internet-based company (you’ll note below that none of these companies are “web only”).

I also want to stress that the websites listed below are the lowest-scoring websites in the 2014 Web Globalization Report Card — and not necessarily the worst global websites, period. The Report Card analyzes a carefully curated group of websites, across more than a dozen industry sectors, with the primary intention of noting emerging and established best practices. Some industry sectors simply do a better job at web globalization than other sectors, such as retail, consumer products, and financial services.

Okay, now that I’ve gotten the caveats out of the way, here are the 20 websites that finished at the bottom of the 2014 Report Card:

Budweiser finished in last place, preceded by Walmart and so on.

A handful of companies have become regulars on this list over the past few years, companies like Walmart, Heineken, Loréal, Sony and Four Seasons.

Lack of global consistency is an issue with many websites. That is, each country web team appears to have gone off on its own and created a website from scratch instead of working across company to share common design templates and resources.

Global gateways are often wildly erratic — or missing altogether. A number of these websites offer no visual clues on their .com home pages to help users find localized websites.

One important note: Taking retail global is incredibly difficult. Companies like Costco, Best Buy, Gamestop, and Walmart face steep odds when trying to expand into new markets — for them, the website may be the easiest aspect of going global. Walmart, for example, has struggled greatly in countries like Japan and Germany — and not because of web localization. The type of industry you are in weighs heavily in the challenges you face as you go global.

Having said all this, there is some good news. A few of these companies could vastly improve their websites with relatively minor fixes; that is, they have the localized content but they’re just not presenting it in a scalable or user-friendly manner.  I also know a few of these companies are in the process of rolling out new and improved global websites right now and they won’t be on this list much longer.