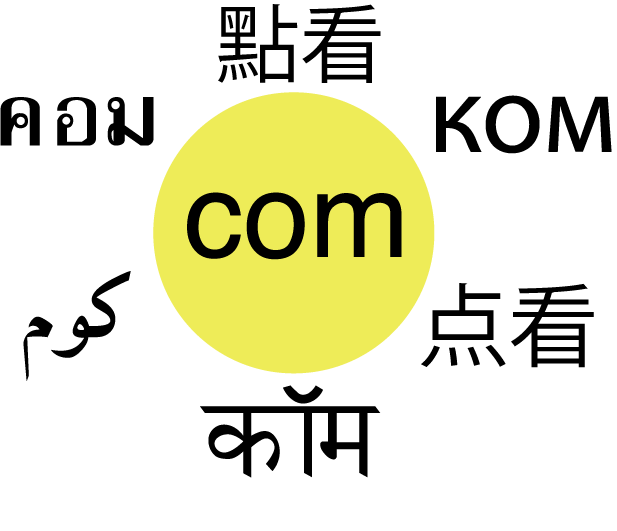 Imagine if, every time you wanted to visit a website, you were expected to type in letters from a foreign language, or worse, an entirely foreign script, such as Arabic, Cyrillic, or Chinese.

For more than a billion people, this is how they experience the Internet today.

The Internet was designed to be global, but it was not designed to be multilingual. For decades, this limitation was most evident in website and email addresses, which permitted only a small set of Latin characters.

Fortunately, over the past decade much work has been done to allow website addresses to support non-Latin characters, referred to as internationalized domain names (IDNs). More than 30 countries, ranging from Saudi Arabia to South Korea, now support country code domains in their native scripts.

For example, Russians no longer have to register a domain using the Latin (.ru) country code and may instead use the Cyrillic equivalent .Рф. And evidence of these new URLs are becoming more visible. Kremlin’s new Cyrillic URL is http://президент.рф. The leading Russian search engine Yandex can be located at http://Яндекс.рф, and the address of Russia’s largest mobile carrier is http://МТС.рф. These addresses are fully functional, and modern web browsers support them.

But what about a local-language equivalent of .com?

ICANN, the organization that manages the domain name system, is in the process of allowing not only local-language equivalents of .com, but an entirely new wave of top-level domains known as generic TLDs (gTLDs). More than a thousand applications have already been filed for these new domains, ranging from .apple (guess who applied for this one) to .book (yes, Amazon is hot for this domain, among others).

Much controversy has erupted over the value or need for all these new domains. Many people claim that .com is good enough, like Esther Dyson, who says “You are creating a business, like derivatives on Wall Street, that has no value.”

Dyson, I would assume, is speaking more about the introduction of Latin-based domain names, and I  understand where she’s coming from. But her sentiment implies that the Internet naming system is largely fine as is.

For more than a billion web users, .com has always been a foreign address.

Local-language domain names do have value. And they will improve the usability of the Internet.

VeriSign, the registry that manages .com, is now pursuing a Russian transliteration: .ком, as well as variations in Chinese and Hindi.

The fact is, IDNs are here, and many more are coming. And the regions these IDNs span constitute more than 2.5 billion people, most of whom do not speak English as a native language. The regions also represent where most of the growth in Internet usage will occur over the next decade.

We’re inching closer to a linguistically local Internet, in which people no longer have to leave their native languages to get where they want to go.

This is a positive development for making the Internet truly accessible to the world.