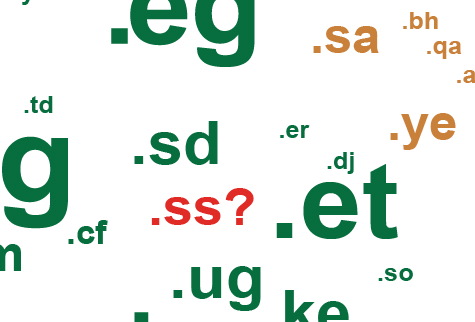 So it’s official now. The Republic of South Sudan is a country.

In case you’re curious what you have to do to become a country, here’s a brief list.

The list fails to mention the need for a country code. In fact, I would put a country code right up there with international recognition.

And, as Paul Sawers at Next Web wisely noted, South Sudan is facing a country code dilemma.

As illustrated above (based on my ccTLD map), South Sudan has applied for the .SS country code.

Needless to say, this is a rather loaded acronym, and many feel that it won’t be approved.

But there aren’t many alternatives. Sudan already has .SD. The .su (Soviet Union) domain could be redelegated except for the fact that there are people still using that domain for legacy sites. So I would imagine the .SU route could be a bit challenging, though it appears to be the best linguistic fit.

What other domains are available that begin with the letter S? I found SF, SP, SQ, SX, and SW.

That’s the tough part about being a brand new country — you’re last in line for the country codes. Now, South Sudan could get a little crazy and apply for .AA or .YY, which are also available. Though I can’t imagine they would get approval.

What do you think?