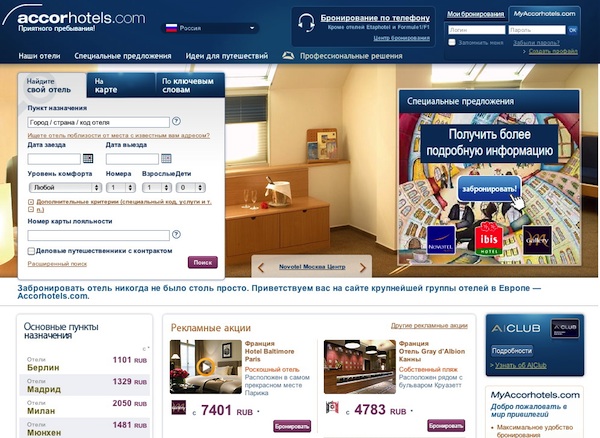 Even though Accor won the category, it still ranks #80 out of 250 web sites, which means the hospitality industry still has a ways to go in terms of improving their global web sites.

Accor emerged on top this year in part because it improved its global gateway — such as adding support for language negotiation. Language negotiation is the process of identifying the language setting of the user’s web browser and then responding with content in that language, if available. If you use language negotiation — and many companies should be using it — you must first have a visual global gateway in place so users can change the language setting if needed. Accor’s visual gateway is well positioned in the header. If you look at the example above you’ll see the Russian flag — as this is the Russian home page. I don’t recommend using flags, preferring instead to see a globe icon positioned next to the pull-down menu and text-only links for each local web sites. For more on this, check out my book on global gateways.

Accor also added Russian and Polish support over the past year. Regarding languages, Best Western leads the hotel category with support for 19 languages (excluding English), followed by Accor and InterContinental. While 19 languages may seem like a lot, this number is actually below the average of 23 languages for all 250 web sites. I expect many hotel web sites to continue to adding languages at a good pace over the next few years.

Finally, though Hyatt did not emerge on top, its global gateway deserves mention (shown below): 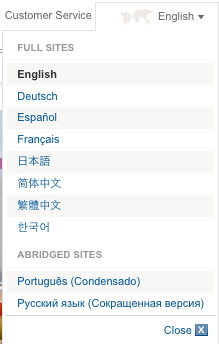 This is a new gateway for the Hyatt web site. Note the map icon at the top — a  very nice touch!

Also note how the gateway offers two “abridged” web sites (at the bottom of the menu). I know it’s never easy for a company to admit that a local site is not fully localized, but it makes good sense to do so. After all, users aren’t stupid. They’re going to find out anyway. By being upfront with them, you build credibility over the long run. I wish more companies were so transparent about their local web sites — a subject for a future blog post.