For a Westerner like myself, the most-popular Korean portals Naver and Daum are a maze of text and images. The pages are too busy, too distracting.

But I’m not the intended user.

Google Korea, as I mentioned in 2007, has big aspirations in Korea. So much so that it tried relaxing its austere design protocol. Here is what the site looked like (up until earlier today):

Apparently, Google still had some relaxing to do.

According to Ohmy News:

Google Korea announced last week that they will integrate “Blog, People and Hot issues links on the upper menu page, with Picasa, Gmail, Textcube and other Google services occupying the lower half,” thus effectively copying the style of Naver and Daum. At the end of the day, even the mighty Google could not fight against the tenacious local culture.

The list of global online brands that have failed to win over the local audience by insisting on their original site design optimized for the western users is long. MySpace heard their death knell last February and Linden Lab could not renew the contract for Second Life with the Korean partner, ending their two year experiment in Seoul. 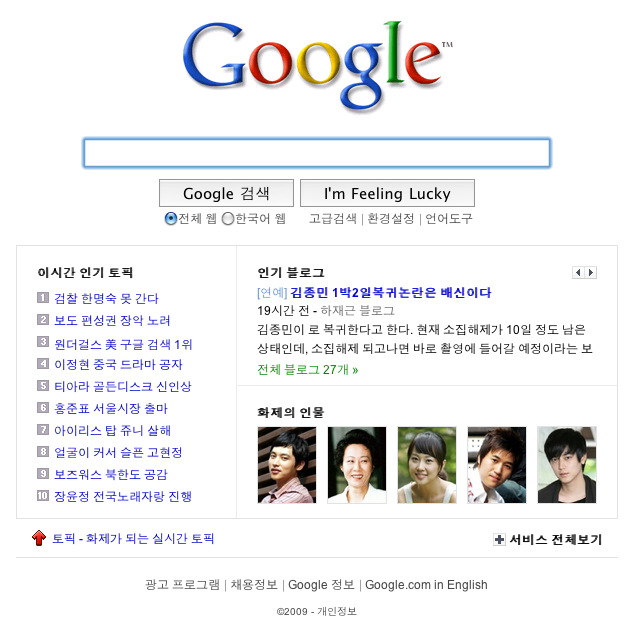 So what do you think? It looks a bit more like the competition.

But the larger question is how far Google will go to localize itself for a market. This is a question every global company must answer. At what point does a company go too far?