Nearly one year ago, I asked Will .CN become the next .COM?

And perhaps I was right in more ways than one.

Because now it appears that .CN is experiencing its very own .COM bust.

Just a year ago Chinese domain registrations were booming, so quickly in fact that .CN had surpassed .DE to become the most-registered ccTLD.

Which means Germany (.DE), at just under 13 million registrations, has regained the top spot as the number one ccTLD.

Even with ccTLDs, there are peaks and troughs, as illustrated here: 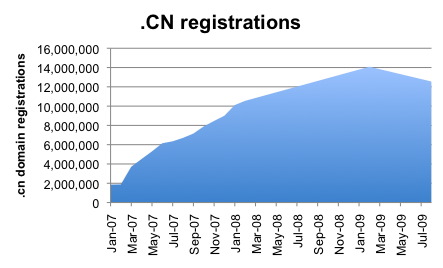 I’m still confident that .CN will reign supreme (perhaps until .IN gives it some competition).

But first it must recover from this little bubble.