About six months ago, I began toying with the idea of biking to work. Driving from Seattle to Redmond is a minor nightmare because of traffic over the bridge. And I know there are people who bike all the time, so I figured I could do the same.

On a Saturday afternoon one November, I decided to bike over to my office and then back again to figure out the route. I figured I was smart in planning ahead.

But I got a late start, a really late start, and by the time I got to Redmond it was dark. I was freezing, dehydrated, exhausted. And my wife had expected me home an hour ago.

I called her and told her I’d be a “little” late. She offered to come pick me up even though she had no idea where I was and, for the most part, neither did I. I hadn’t actually made it my office — that would have taken another half hour.

So I swallowed what little pride I had left and asked her to come get me. Now, there was just one problem with this situation — she didn’t know where I was. I had my iPhone so I was able to talk her over the bridge and eventually to the gas station where I was making myself home. But it wasn’t a pleasant experience, to put it mildly, and one she will never let me forget.

If I had only had the iPhone app that my brother just developed, things would have gone quite a bit more smoothly. The app allows you to email your current location to someone else so they can map out how to get to you. Simple. Easy. I’ll be sure to have it with me the next time to try biking to work… 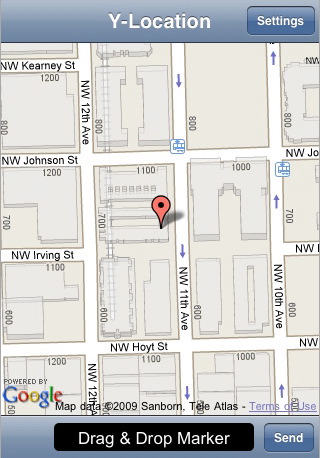 2 thoughts on “An iPhone app for lost souls”