Earlier this year I developed the Map of the World Wide Web, shown here: 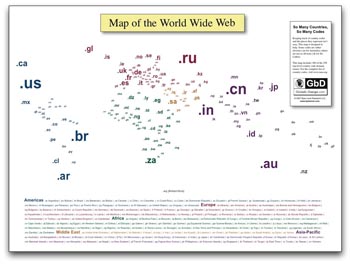 This map was designed to fit on a cubicle wall and include the major country code top level domains (ccTLDs) that a global Webmaster may encounter.

And although the map includes a whopping 180 ccTLDs, that is not all of them. To include all of them, I would have to develop a much-larger map, which is what I ended up doing.

And here it is, our newest and biggest map, shown below: 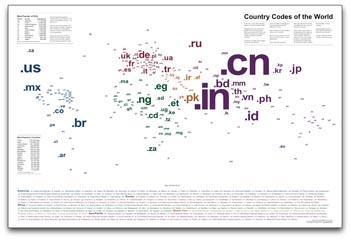 This map effectively includes all ccTLDs — 245 in all. Yes, there are more country codes than there are countries. That’s because you don’t have to be a country to have your own country code. The uninhabited Bouvet Island has a code: .bv. Even Antarctica has its own code: .aq.

To learn more, go to www.bytelevel.com/map/ccTLD.html.

2 thoughts on “Are You Master of Your Domains?”