The Economist has just made its US editor John Micklethwait the new editor-in-chief. According to this NYT article the promotion will result in greater coverage of the US market…

The Economist has bureaus in Chicago, Los Angeles, New York, San Francisco and Washington and has hired what Mr. Micklethwait called a “super stringer” in Austin, Tex. Mr. Micklethwait said he was also contemplating opening more bureaus across the country.

I just hope that this added US coverage doesn’t come at the expense of non-US coverage. After all, that’s why I read the magazine and why I suspect many of the other 569,000 American subscribers do. The US is now the magazine’s largest subscriber market, which I believe is due to the fact that US papers have closed their foreign bureaus over the years (a myopic error of epic proportions in this age of globalization).

There is no shortage of coverage of the US, but if I want to know what’s going on in Tanzania, I first turn to The Economist. So here’s hoping that every new bureau the magazine opens in the US is matched by a bureau abroad. 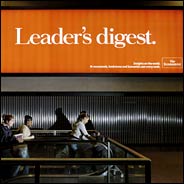 Apparently the headline “Topical Solution” was created just for the US market. It didn’t make much sense to the Brits.