The folks at the Pew Global Attitudes Project have produced a report that further illustrates the dramatic growth in Internet usage around the world — particularly in emerging markets. You can download a copy of the report here

According to the report, “in each of the 13 countries for which historical comparisons can be made, more people now use computers at home, school or work than in 2002. The rise is dramatic in Turkey, Russia, India and Poland, where the number of those who say they use a computer at least occasionally has risen by 13 percent to 16 percent.” 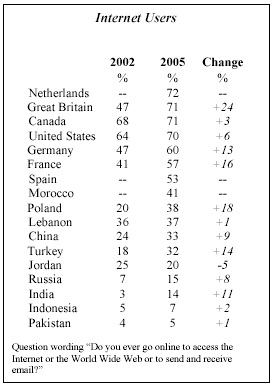 The key takeaway is that the developed markets may still have room for growth, but they’re nearing the ceiling. Emerging markets are where there is plenty of headroom — and plenty of challenges. And if I were a translator of Turkish and Polish, I’d be pretty happy with these numbers.