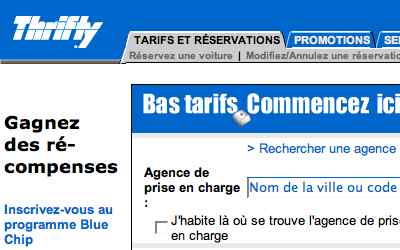 This is also another sign that the hospitality/travel industry is embracing Web globalization in a big way this year. Hotels have also been investing heavily in localizing their Web sites lately, such as Best Western.

Thrifty does business in 64 countries, so I imagine that more languages are inevitable. However, it is very important that these first three languages be a success for the company to invest in additional languages; after a brief tour of the sites, I have a number of recommendations to improve Thrifty’s likelihood of success. If you’ve been reading this blog for awhile, you’ll probably know what I’m talking about when you visit the site.

I will be analyzing the Thrifty Web site in our next issue of Global By Design.