The iTunes Music Store is slowly but surely extending its global grasp. iTunes is the software companion to the iPod, allowing users to buy songs and books a la carte over the Internet.

As the iPod has been expanded into new markets, so has the iTunes store. According to recent news reports, Apple is on track to launch a pan-European iTunes application in October. However, this application will be in English only.

To date, Apple has localized iTunes for three markets: Germany, France and the UK. Japan is no doubt close behind. Here are a few scree shots of how iTunes directs users to the country-specific iTunes apps.

Once you install and run the iTunes application, you can switch between country Web sites by clicking on the flag gateway, shown here:

And here is a larger screen shot of the iTunes Germany home page.

Finally, once you click on the flag gateway, you’re taken to this page offering you a colorful selection of flags: 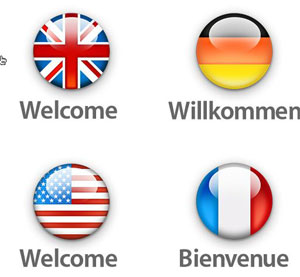 Flags are clearly the navigation icon of choice. As you may already know, I’m not a fan of using flags as navigational icons, although they do have more relevance in this case due to copyright law. It seems that the major obstacle to Apple taking iTunes globa isn’t so much language as legal issues. Copyright laws vary by country, which makes the use of flags much more important from a legal “cover our rear end” perspective.

Flags is as a navigational icon, do not scale well. I’ll be interested to see how Apple manages navigation once it has iTunes in two dozen countries. And given the recent launch of Microsoft’s music service, there is more urgency to get there quickly. Ideally, the coming European iTunes application would be localized for each market, but it appears that Apple is simply in a rush to launch the darn thing before Microsoft gets any momentum. FIrst came the legal hurdles, language comes later.