Since 2000, the Economist Intelligence Unit has published an annual “e-readiness” ranking of the world’s 60 largest economies. A country’s “e-readiness” is based on a number of factors, such as mobile and broadband penetration, Internet usage, and the regulatory environment.

Here are the counties that made the top 20 this year: 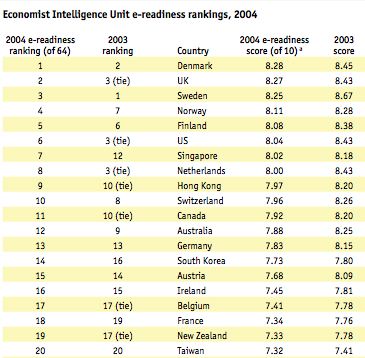 Clearly, the Nordic countries have fared quite well. The US, despite being sixth, is the highest-rated large country in terms of populatioin and land mass. When you spread a large population over a large land mass, broadband coverage is a much more expensive endeavor than it is in, say, Britain.

Here’s what the EIU has to say about its rankings:

When the e-readiness rankings were introduced in 2000, the US was the indisputable leader. In each year since, its position has eroded as other developed countries, particularly in Northern Europe, have advanced. In 2003 the US lost the pole position to Sweden, and in this year’s ranking it falls back to a humbling sixth place, bested by the four Scandinavian countries and the UK. Decay in the world’s Internet superpower? Or is something else going on?There is. Despite the dotcom bust and pummelling of the IT industry, which hurt the US disproportionately, the US continues to make strong strides in e-readiness. Its decline in the ranking is a result of other countries making faster progress. Northern Europe, and the Nordic countries above all, are experiencing accelerated penetration of high-speed Internet infrastructure and advanced e-business services. The Internet is transforming the ways in which people interact, in both the commercial and public realms. Scandinavia is remarkable for the way in which citizens have incorporated Internet technology into their daily lives, completely altering how they work, shop and communicate with officials.

The changing fortunes of northern European countries, on the one hand, and the US, Canada and Australia — the Internet pioneers that led our earlier rankings — on the other, is the most salient development over the five years of our e-readiness rankings. The most remarkable gains have been registered by Denmark and South Korea–up nine and seven places, respectively, since we substantially revised our methodology in 2001. In the same period, Japan, Russia, Egypt and Peru have fallen almost as far as Australia, by seven places each. While these countries have under-performed against their peers, it is not a case of decline, but rather of stagnation or slow development compared with more aggressive e-leaders. Indeed, nearly every country in our ranking is making progress. Whether they are progressing as quickly as their neighbours is the question.