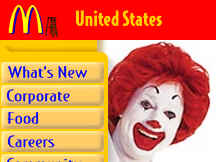 McDonald’s is about as American as apple pie, and that’s not such a good thing in parts of the world where America not in vogue. Consider the following from the Toronto Star:

Around the world, McDonald’s restaurants have been burning. One was torched in Riyadh, Saudi Arabia, on Nov. 20. Another blew up in Moscow on Oct.19, while less than a month before, a small bomb ripped through a franchise in a suburb of Beirut.

For more than three decades, the public’s craving for those limp little hamburgers has fuelled a massive global expansion, making McDonald’s the most recognizable company in the world, with franchises in 121 countries. There’s a meat-free McNistisima menu for fasting Greek Orthodox in Cyprus, a McRye burger in Finland, a McNifica burger in Argentina, a kosher McDonald’s in Israel, and in France, wine to set off the standard greasy fare.

But since the end of the Cold War, that growth has also made it a global favourite for those looking to blow up their own little piece of the American empire. And along the way, the Golden Arches have become a Rorschach test of domestic and international discontent, mirroring anxieties at home and abroad. In the United States, the company is blamed for the obesity epidemic, today’s hot-button medical panic.

Businesses need to be wary of being too closely identified with their native countries. I’m not suggesting that a company should avoid wrapping itself in its native country’s flag, but to be acutely aware of the risks associated with it. And to soften the blow of any national backlash, multinationals should ‘act local’ — particulaly through Web localization.