Sometimes it’s difficult to see a revolution when you’re standing right in the middle of it.

Which is how I still feel sometimes when it comes to web globalization.

Web globalization feels at times like slow-moving revolution. Every year, companies add, on average, a language or two to their websites. And while one or two languages may not seem all that “revolutionary” at the time, over a number of years, the growth is significant.

Particularly when you take a ten-year perspective.

Shown below are five of the many websites that I’ve tracked since 2004. Note that English for the US is not figured in the counts: 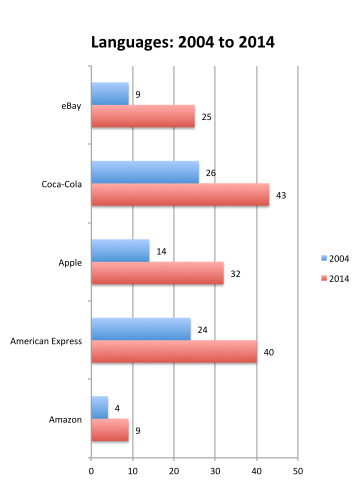 American Express went from 24 languages to 40.

Apple has more than doubled its language count in that time as well, though I believe Apple should be doing much more in this regard; Apple still lags the websites of Samsung, Microsoft, and Google.

What’s important to note is that most companies more than doubled the number of languages they support over this time span. Not just the companies listed here but a good number of the companies in the Report Card.

As for Amazon, it too doubled its support for languages, but  remains well behind the pack in linguistic reach. I’ve long argued that Amazon took its foot off the web globalization pedal prematurely. And now that Apple is selling digital media in more than 50 countries, with Google close behind, I wonder if this is the year we see Amazon start to invest in global expansion again.

The language growth underscores a point I often make regarding web globalization — you need to think about “scale” as early as possible.

That is, will your global template scale? Will your workflows, management structure, vendors, and software scale?

You may be planning to add only one additional languages this year, but as this chart demonstrates, you may be adding 20 languages over the long run.

As I’ve said before, the Internet connects computers but it is language that connects people. This is the revolution going on all around us, though often in slow motion.