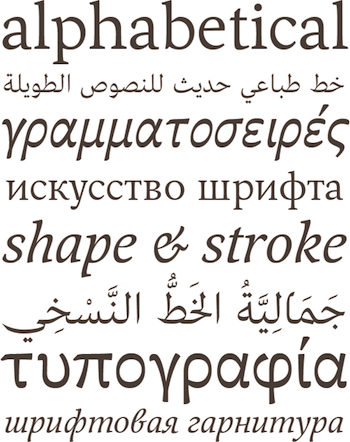 An interesting article on the development of a new multi-script font.

To create the font, four designers worked on a script each: Latin, Greek, Cyrillic, and Arabic.

The end result is a font that provides a consistent look and feel across good range of languages.

To draw a parallel with the world of music, I see ourselves as four musicians who improvised together on a musical theme fixed by one of them – this implies a lot of freedom, but also a lot of effort, listening to the others and building upon their improvisations.”

In fact, the decentralized model is similar in many ways to that of successful web and software globalization projects. You need local-language experts to play an active role early on in the process, while still sharing global goals.