A few years ago I spoke with an executive at a Fortune 500 company who confidently explained why his company wasn’t translating its Web site: “The world will all be speaking English soon enough,” he told me.

His Web site has since been translated.

So perhaps the world won’t all be speaking English anytime soon. But it’s safe to say that English is becoming the lingua franca of the world. It’s the most popular second language being taught in Europe and much of Asia. But the thing to keep in mind is this: Even if the world does all one day speak English, for most of the world, English will still be their second language.

Which is why I was excited to see The British Council publishing a book on the future of English by a guy who has been writing about this issue for many years. His name is David Graddol and the book is called Next English. 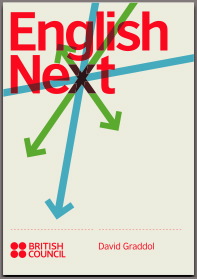 The book is free and you can download a copy here. I’m still working my way through, but here are some items that jumped out at me:

-> A massive increase in the number of people learning English has already begun, and is likely to reach a peak of around 2 billion in the next 10 to 15 years — nearly a third of the world’s population.
-> Monolingual English speakers face a bleak economic future, and the barriers preventing them from learning other languages are rising rapidly.
-> The competitive advantage which English has historically provided its acquirers (personally, organisationally, and nationally) will ebb away as English becomes a near-universal basic skill. The need to maintain the advantage by moving beyond English will be felt more acutely.