Because I spend the bulk of my time talking to US executives about expanding globally, my focus is typically on creating non-English Web sites. But Web globalization cuts both ways. If you’re a Russian company, for example, you’ll need an English-language Web site if you want to expand in the US. Most companies do this by default, but it’s no less challenging than an American company launching a Russian-language Web site. Often, companies do a fairly poor job with their English-language sites the first time out.

According to this article, the Moscow Interbank Currency Exchange (MICEX) just launched an improved English version of its Web site. 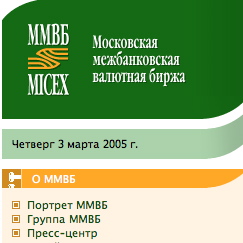 I took a look at the MICEX site and it’s clear they put a lot of effort into it. Everything from press releases to the feedback form and FAQ are in English.

According to the press release…

…new English version of the MICEX’s web site will help to raise the transparency of the Russian financial market, which, considering Russia’s growing investment rating, is essential for attracting the attention of international investors.

It’s all about money. If you want money from people who don’t speak your language, translation is step one.