Would you believe that the Tom Hanks’ film The Terminal turned a profit?

I wouldn’t have believed it, not until I read this Wall Street Journal article (paid subscription required).

The Terminal did indeed tank in the US, but it turned a profit overall, thanks to the foreign markets. No wonder movie stars are racking up the frequent flyer miles plugging their films around the world. Overseas revenues were once viewed as little more than gravy on top of domestic revenues. No more.

It’s the foreign box office, stupid. While movie attendance has been stalling in the U.S., it’s growing in other parts of the world, making Prague as much a bellwether for Hollywood as Peoria. The box office for movies in Europe, the Middle East and Asia will grow at an annual compounded rate of 4.7% to $8.3 billion over the next five years, according to estimates from PricewaterhouseCoopers. That’s slightly below projected box-office rate growth in the U.S., but it’s significant enough to buoy movies that sink stateside, especially when the movies feature stars who have a bigger following outside the U.S.

The focus on the foreign market has even caused studios to change who gets cast and where movies are made. “Ocean’s Twelve,” which will be released Dec. 10 and is the sequel to the 2001 caper flick, “Ocean’s Eleven,” was deliberately set in Europe and filmed in Amsterdam, Paris and Rome, to “enhance the movie internationally,” says Alan Horn, president of Warner Bros. Pictures. “Ocean’s Eleven” pulled in $183.4 million at the U.S. box office, but $267.3 million overseas. Mr. Horn says he expects “Ocean’s Twelve” to do more overseas than “Ocean’s Eleven” did.

Anyway, if you’re traveling to Berlin this winter, you might want to check out Der Polarexpress, playing at a cinema near you… 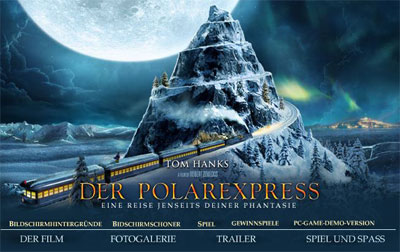