Google appears to be doing for blogs what it did for search engines. According to this InfoWorld article, Blogger, which is owned by Google, is going to be localized for 9 languages “soon.” The languages are Japanese, traditional Chinese, simplified Chinese, Korean, French, Italian, Spanish, German and Brazilian Portuguese

This can’t be good news for the folks at Six Apart. Although they have a head start over Blogger, having already localized TypePad for six markets, I can’t imagine they can hold that lead for long.

Here is where TypePad stands today: 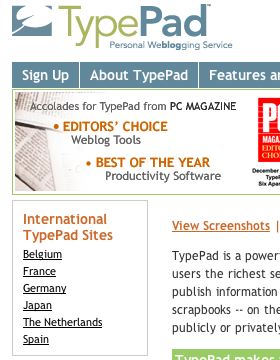 It will be interesting to see how many locales are supported six months from now and where Blogger stands in relation. Google, as I’ve said before, is arguably the most global commercial Web site ever created. With 97 language interfaces, it truly speaks to the world. There is no reason why Blogger can’t also be available in 97 languages; but can TypePad (and the other blog services) keep up?